Our roots are in helping others

Helping clients make a difference since 2006 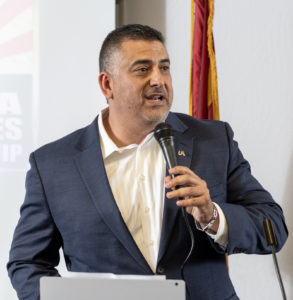 As the former regulatory authority of Arizona’s construction industry from 2003 to 2006, Torres reviewed and decided thousands of residential and commercial construction complaints. He won wide recognition as a fair and respected regulator as the Director of the Arizona Registrar of Contractors (ROC). Additionally, he reformed the ROC’s mission and brought innovation and service enhancements to the state’s 52,000 licensed residential and commercial contractors, while developing first-time consumer initiatives to protect homeowners and seniors statewide.

Through partnerships with neighborhoods, senior groups, industry associations and organized labor, Torres made unprecedented strides in consumer advocacy and protecting Arizona seniors and homeowners from construction fraud. He spearheaded major new efficiencies for Arizona’s construction industry, focusing on small business contractors and online services, and took an unparalleled aggressive stance on unlicensed contracting and the crimes against Arizonans that it precipitates.

Torres won the 2006 Arizona Democratic Primary and was elected as the Democratic nominee for Arizona’s second highest constitutional office – Arizona Secretary of State.

He has served on the boards of directors for the Children’s Action Alliance, Arizona Consumers’ Council and the Arizona Hispanic Chamber of Commerce, and was president of the National Association of State Contractor Licensing Agencies. He also has provided his time and leadership to Friendly House and Chris-Town YMCA. Torres has served as an Adjunct Professor in the Maricopa Community College System and is a frequent speaker at seminars and conferences nationwide.

Torres is a member of the Arizona Bar and is licensed to practice law in Arizona. He also served as a Zoning Adjustment Hearing Officer for the City of Phoenix and he has official mediation training from the University of New Mexico (UNM) School of Law. His educational background includes a Juris Doctor from the UNM School of Law and a Bachelor of Arts in Political Science from Arizona State University.