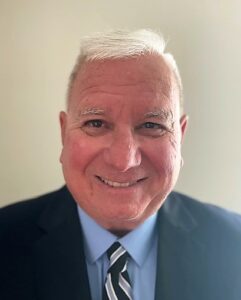 Russell obtained his Associates of Arts Degree from St. Petersburg College before graduating from the University of South Florida with a Bachelor of Arts in Political Science.

He has been a member of the United Association of Journeymen and Apprentices of the Plumbing, Pipefitting and Sprinkler Fitting Industry of the United States and Canada for over 35 years. Prior to joining TCLG, Russell was the director of marketing for the Florida Pipe Trades, where his efforts focused on educating members and end-users on the Fair Labor Standards Act and Davis-Bacon Act. During his time as the director of marketing, Russell was called to testify before the Florida Senate’s Commerce Committee in hearings which led to Governor Charlie Crist signing Floridian’s First into law. Prior to this, he was the organizer for Plumbers and Pipefitters UA Local 123 in Tampa.

Russell was also a board member of Worknet of Pinellas where he played a pivotal role in obtaining a $1 million grant from the Department of Labor under the CLEAN Energy Grant program. In addition, he served on the Business and Economic Development committee, Educational Ad Hoc committee, and Pre-Apprenticeship committee.

In his down time, Russell can be found on the waters of Tampa Bay enjoying the sunshine and cool breeze with his family and friends.